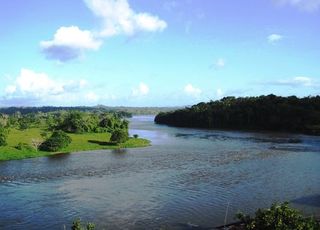 The Rio San Juan is a timeless passageway through dense tropical rain forest from Central America's grandest lake to the Caribbean Sea.

It has a wealth of attractions:

This historically important river was the stage for great colonial period battles between the Spanish Crown and British and French pirates and later became the route of Cornelius Vanderbilt's inter-oceanic steam ship service during the California gold rush.

Described by Mark Twain as "an earthly paradise", The Rio San Juan is one of the most enjoyable and rewarding rainforest experiences available anywhere.

This boating wildlife safari travels the entire 190 km length of the San Juan River, from the inland sea of Lake Nicaragua to the Caribbean.

Savor the fabulous flora and fauna of the Indio-Maíz Biological Reserve, 4,000 square kilometers of virgin rain forest and wildlife. The rain forest Indio-Maíz reserve has been described by University of California at Los Angeles biologists as "the gem of Central American nature reserves".

We'll explore it in depth with visits to the extraordinary Indio River, which runs into the heart of this precious rain forest nature reserve and many others of the reserve's hidden veins.

The Indio-Maíz Biological Reserve is home to many endangered species: howler monkey, white faced and spider monkeys, jaguar, giant anteaters, crocodiles, toucans, parrots and a rainbow of orchid and butterflies.

Join us for a trip into the largest and most pristine  expanse of lowland rain forest north of the Amazon basin, Nicaragua's Indio-Maíz Biological Reserve.

Contact  info@nicaraguavacationpackages.com for information about trips along the Rio San Juan.